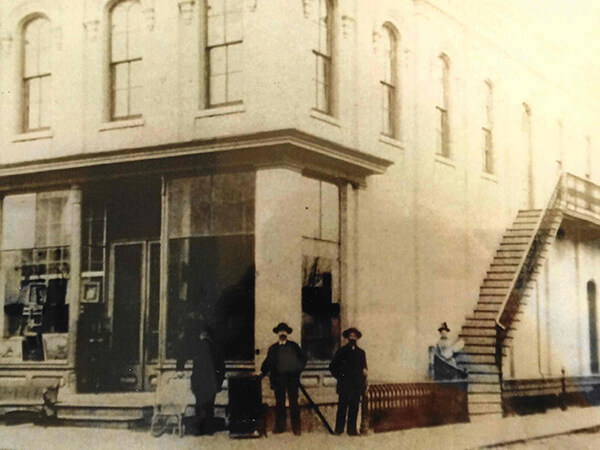 Christian Schmutzler and family arrived in Watertown from Baveria in 1851, bringing with them skills in retail, banking and building. Christian was a builder by trade, having built the little Bavaian "Eagle House" on Cleveland Street, the old city hall, several public schools, and numerous dwellings. He also built the family residence on 721 North Fourth Street and a cabinet/furniture shop next to the home on Green Street.

They were often called upon to make coffins, so in 1873, Christian and his son Edward, opened the Schmutzler Funiture and Undertaking Establishment on Fourth and Main Street, today the home of Tribeca Gallery Cafe & Books. Edward's son, Oscar Sr., joined the firm in 1919, after returning from WWI . In 1935, Oscar remolded the family home on 721 North Fourth Street. Quoting the Watertown Daily Times, "adding a modern chapel, and display and preparation rooms." The undertaking business moved from Main Street to North Fourth Street and the Schmutzler Funiture Store remained on Main Street.

Between 1954 and 1959, Oscar Sr. son's joined the undertaking and furniture store, Oscar Sr., also known as Hap, Donald and Robert.

Recognizing the needs of families, in 1999, Ray and Janet built a new, very modern funeral home to serve the families of today on 500 Welsh Rd. in Watertown. The funeral home was renamed to Schmutzler-Vick Funeral Home & Cremation Service. The design included a crematory on site, the first in Dodge and Jefferson Counties, being on the county line. Built on one level, with plenty of natural light, wheel chair accessible bathrooms, family area, children's play area close the chapel, music room and a family reception area, located across the hall from the chapel. Our reception hall allows us to provide, Hors D'oeuvres, sandwich buffets, and sit down dinners to desert, an option that has been received very well by the community. The chapel and parking area is the largest in the area, again, keeping in mind the needs of todays families.

We continue to follow the Schmutzler and Hart tradition of hometown service while incorporating the use of today's technology and the changing trends in the funeral industry.

People you can rely on, today and tomorrow.